Quoted price is for 2½ hours playing spread over 3 hour period.

About The Regondi Guitar Duo

The Regondi Guitar Duo (formerly known as The Lee-Davies Guitar Duo) brings together two top, professionally-trained guitarists - Simon Davies and Nicholas Lee - who started playing together in 1992 whilst studying classical guitar at the Royal Northern College of Music from which both have degrees.

The duo has recorded a CD for Telstar Records - Guitar Serenade - and played at many concerts halls including the Manchester Free Trade and the British Music Information Centre.

Their private function work has included numerous weddings (both ceremonies and receptions), parties and corporate celebrations at hotel, restaurants and other venues including the Westminster Boating Base and the Tower of London. The Regondi Guitar Duo usually perform for two-and-a-half hours over a three hour period.

The Regondi Duo are based in the south east. See Pricing for details of travel costs, etc.

"The Regondi Guitar Duo were a fantastic addition to our wedding ceremony. Their performance throughout was first rate and we had lots of good feedback about them from our guests too. We were also very grateful to them for learning a piece we had requested and for playing it so well during the signing of the register."
Alexa Scoones - wedding ceremony - Surrey - April 2013

"The Regondi Duo were terrific. Great musicianship, lovely people to talk to, beautiful to listen to. They really gave us a terrific accompaniment to our wedding reception. Thank you both, we heartily, readily recommend you to anyone seeking a class act with versatility, professionalism and the ability to create just the right atmosphere for an important occasion such as this. Terrific!"
Colin Gardiner - wedding reception - Hertfordshire - September 2007

"The Regondi Guitar Duo were excellent and moved around the venue happily and with ease as guests and weather dictated. Many guests commented on how impressed they were."
Emma Houston - wedding reception - Cambridgeshire - July 2006

"I have received professional and excellent service from FJ and will recommend you to my friends."
Sarah Bearman - wedding reception - Burnham - April 2006

"Guests commented what an extra special touch it was having the guitarists – we were really pleased with them and their performance. Brilliant!"
Ben Willy - wedding reception - Essex - July 2005

"We had a fabulous day and the Lee Davies Guitar Duo added to it perfectly. There was no faulting their performance or professional conduct. Also thanks to Function Junction for such a seamless service."
Libby Gayford - wedding reception - Berkshire - July 2004

"The duo were superb, real professionals whose music added that special bit extra to our wedding. Everyone commented on how excellent they were and we would certainly recommend them to anyone."
Liz Baker - wedding reception - Worcestershire - June 2004

"The guitar duo were extremely professional and played all of the music we requested. Many of our guests commented on how good they were and asked how we heard about them (we told them!) Please thank them on our behalf for such a fantastic performance. We will be recommending them and Function Junction to our friends."
Jo Conrad and Wayne Halls - wedding reception - Croydon - October 2003

"Lee-Davies Guitar Duo were simply excellent and contributed towards making both Warren’s and my day absolutely fantastic, thank you so much to all of you, could not have done better! I really cannot describe enough just how great they were."
Lisa Carter - wedding reception - Kent - September 2002

"…they were excellent … nothing but good reports from everyone."
Nick Thompson - wedding ceremony - Brecon - May 2001 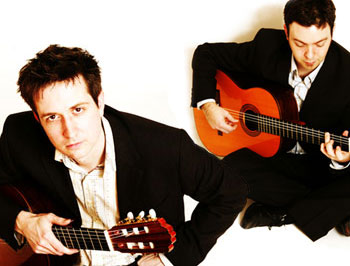 Popular
Annie's Song
As Time Goes By
Autumn Leaves
Bamboleo
Beatles - Hey Jude, Imagine, Yesterday, Here There and Everywhere
Born Free
Bridge Over Troubled Water
Bright Eyes
Cavatina
Danny Boy
Every Breath You Take
Feelin' Groovy
Hello
He's my Brother
I know him So Well
Lady in Red
Love Changes Everything
Manha de Carnaval
Memory
Misty
Moon River
Music of the Night
Nights in White Satin
September Song
Something Stupid
Somewhere Out There
Streets of London
Summertime
The Carnival Is Over
The Entertainer
The Girl from Ipanema
The Party's over
Theme from Titanic
Whiter Shade of Pale
You Were Always on My Mind

This is just a selection of the The Regondi Duo's repertoire. For clients who don't specify a type of music the duo usually include a selection of classical, popular, Spanish, show tunes, etc. They can also adapt their programme to feature a specific type of music, eg: Spanish, South American, etc. The repertoire list is always expanding.