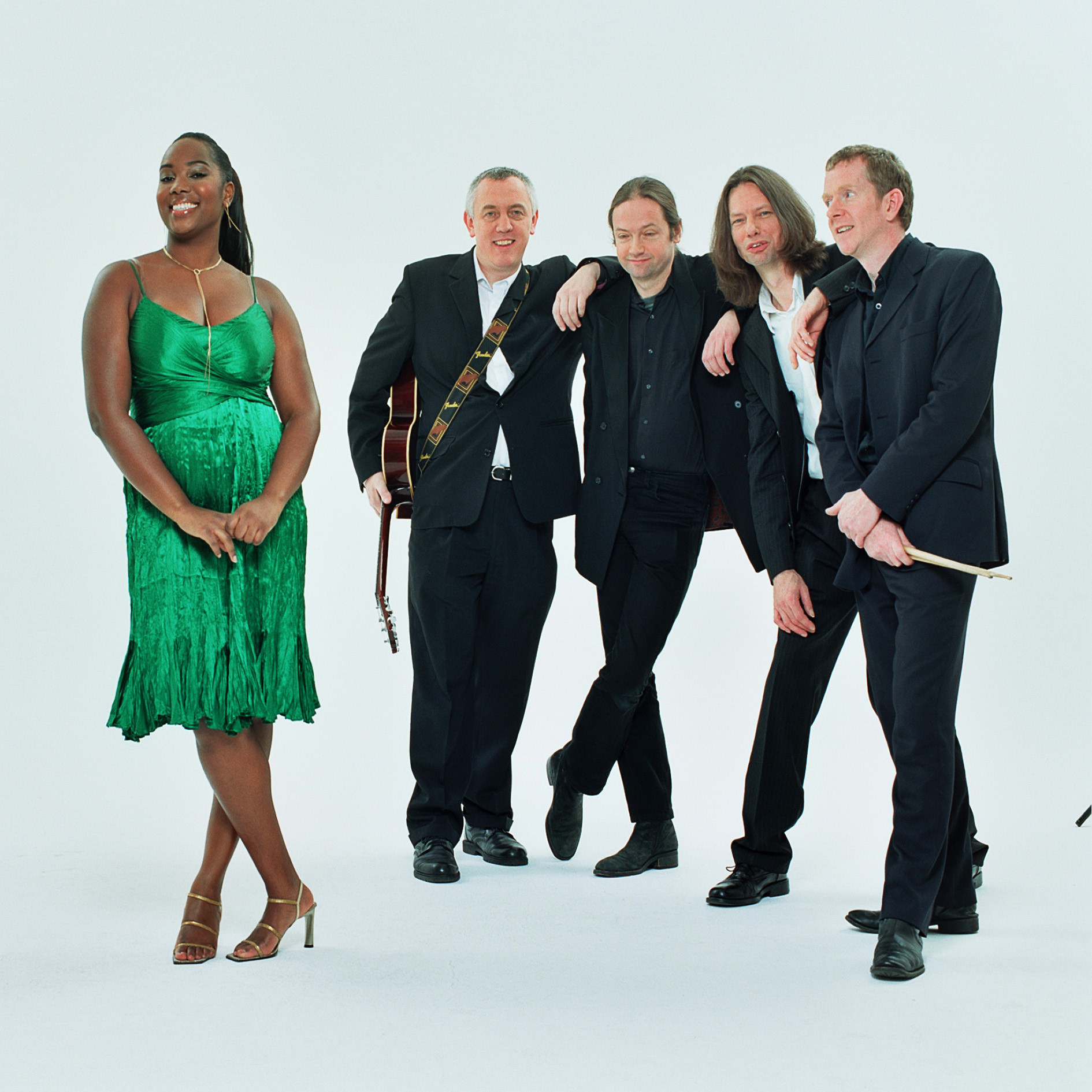 Fronting this six-piece band is vocalist Marion J whose voice can move effortlessly from sultry dinner jazz to floor-filling dance numbers.  More than just a gifted vocalist Marion is also an exceptionally hard-working entertainer who can rapidly build a close rapport with the audience.  The rest of this sparkling band consists of guitar/sax/vocals, keyboards, female backing vocalist (not in their photo), bass and drums.  An additional saxophone and trumpet can also be added on request.

Members of the Fabulations have played with many leading Jazz musicians such as Alan Skidmore, George Shearing and Tony Coe and can have been spotted recently playing at the Queen Elizabeth Hall and the Scoop on London’s South Bank as well as well known London Nightspots such as Sway in Covent Garden and the world famous Ronnie Scotts,

Our quoted price is for two one-hour or three 40-minute sets and the band provide their own PA and lights, and recorded music in their breaks.

Travel and cost:
The Fabulations are London-based. See Pricing for details of travel costs, etc
Add to My Enquiry List

"I just wanted to drop you a line to say thank you so much to you and the rest of the band for the music at our wedding at Cain Manor. We had such a wonderful day and the evening music was fantastic. We have had so many compliments on the band - great live music and created a really brilliant atmosphere! I've never been at a wedding where so many people are continuously dancing all night....it was exactly the party atmosphere that we were looking for!! If we have another party in the future, I would have no hesitation to book the band again and I will certainly be recommending the band to anyone I know who is looking for live music! Many thanks again..."
Claire and Simon Martin - wedding reception - Hampshire - September 2010

"The band are all amazing musicians and performed spectacularly on the night! They sounded fantastic on the demos, so we knew they'd be good, but we were still blown away hearing them live! They made sure we had the biggest party ever, getting everyone on the dance floor and having so much fun! Especially with Marion's bubbly personality! Everyone was jumping up and down, shaking their hips and generally going for it on the dance floor! The atmosphere was fantastic! They really made our evening reception so special, it's more than we could have wished for! The best wedding party we could have imagined, so thank you so much. We had invested so much time choosing a band and it really paid off. My husband and I are both musicians ourselves and so having a great band for our wedding was a big priority for us. We feel elated, that we found the best band ever! In fact, everyone kept asking about them and saying that they were the best band they'd ever heard!"
Jenny Norton - wedding reception - Surrey - September 2010

"The band were absolutely fantastic and made our day, the best day ever, even better. Our guests are still raving about them now."
Jacqueline Bird - wedding reception - Essex - December 2009

"We could not have asked for any better, our guests are still making comments on how fantastic the Fabulations are. The lead singer was so interactive with our guests and really got the party started. The band were professional throughout! Thank you so much for making our reception so enjoyable for us and our guests."
Nick Bryant - wedding reception - Essex - September 2009

"I have seen the band before and they did not disappoint. They were excellent. Function Junction was very efficient and I would recommend them."
Mark Jarvis - wedding reception - Norfolk - August 2009

"The band were superb, all the guests said it was the best band they had seen. They even managed to get my cousin's husband up dancing (he doesn't dance) after the night he came to tell me how fab he also thought they were. Exceeded expectations."
Cristina Arpino - Party - Buckinghamshire - May 2009

"They were absolutely fantastic. I cannot put into words how great they were. Very professional, dance floor was packed all night - I never stopped dancing either. Lots asked me how to book them - all said they were amazing. Thank them for us if you would."
Faye Hemming - wedding reception - Warwickshire - April 2009

"The Fabulations were amazing, even better than we could of hoped. Our guests were dancing all night, then phoning the next day to say how brilliant they were. Without a doubt they made our day! Thank you."
Keith Kemsley - wedding reception - Essex - August 2008

"The band were fantastic - even better than we had hoped. The wedding guests loved them - we had lots of ‘Where did you find them?’ questions! The lead singer was great - really engaged with the audience, was enthusiastic and very friendly. The best wedding band we have ever seen!"
Athena Tsangarides - wedding reception - London - September 2008

"The service we received from Function Junction was first class. The band were absolutely fantastic at the wedding - they played exactly what we asked them to and we received so many positive comments about them from our guests. Thank you!"
Louise Dawson - wedding reception - Surrey - August 2008

"What can I say ….The Fabulations are the most amazing live band I have ever heard. Marion is the most beautiful person and singer. They performed fantastically at my wedding and the dance floor was packed the whole night! They made my wedding entertainment look like I had spent absolute thousands of pounds. All of my guests commented on their style, charisma, talent and approachable nature. My family and I are officially the Fabulations number one fans!"
Trina O’Neill - wedding reception - Hertfordshire - October 2007

"A great band, gave fabulous performance. The song they learn for us was exceptional. Everyone has commented on how great they were when talking about our wedding. Thank you."
Frank Brown - wedding reception - Buckinghamshire - September 2007

"The Fabulations were excellent. The lead singer interacted superbly with the audience and even let me (the groom) sing (briefly!). She was lovely and the band added a touch of class to the evening"
Stephen Shepherd - wedding reception - Cheshire - September 2007

"I would appreciate it if you could send my thanks to the Fabulations, they were fantastic. They really made the day for us."
Nicholas Payne - wedding reception - London - August 2007

"The band were even better than we could have imagined and had everyone dancing very quickly - appealed to a wide spectrum and age of people. Thanks."
Lucy Eynon - wedding reception - Glamorgan - August 2007

"The Fabulations were fantastic, the guests really enjoyed the music and the band's performance made the night!"
Justin Hobson - wedding reception - Berkshire - July 2007

"The Fabulations were FANTASTIC. Totally flexible on timing (we were running behind on the speeches). Everyone commented on how good they were. And - they learnt and played our first dance live. Please pass our comments to the band."
Laura Wilcox - wedding reception - Hertfordshire - July 2007

"The Fabulations were outstanding. They managed to get everybody dancing - no mean achievement - and really created a vibrant atmosphere for the evening. Guests said they were the best band ever. I cannot praise them more highly!"
Shona Norman - wedding reception - Norfolk - April 2007

"The band were extremely accommodating, happy for my cousin to do a couple of Elvis numbers with them, and generally a total pleasure to have at our wedding. Marion was incredible and really set the party mood."
Melissa Cook - wedding reception - Berkshire - February 2007

"The Fabulations were fantastic - really enthusiastic and the music was great! They made the night for us and made it practically impossible to stay off the dance floor!."
Liz Nicholls - christmas party - Surrey - January 2007

"Band were superb - Marion was great - a real crowd turner! We had a lot of compliments about how good the band were and we hope they enjoyed themselves too!"
Marigold Charles - wedding reception - London - August 2006

"The Fabulations were fantastic - they were loads above the other bands I had listened to during the selection process. Extremely professional and entertaining, everyone commented on how good they were, would recommened them highly!."
Gregory Pamel - wedding party - London - May 2006

Got questions, or want to book 'Fabulations' for your wedding, party or event? Add them to your Enquiry List and then send them a message to check their availability.
Add to My Enquiry List