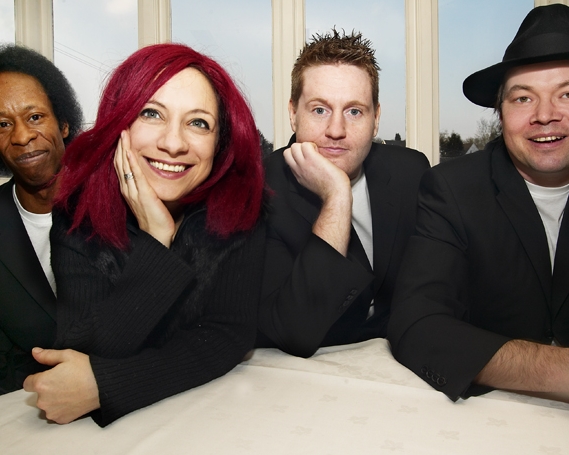 About The Bet Lynch Experience

Followers of Coronation Street will know Bet Lynch as the man-hungry barmaid at The Rovers Return. You may ask what this has to do with a party band playing the best of 60s to 2000s hits. The answer is absolutely nothing, other than demonstrating the band's rather wacky approach to what they do! But don't worry, although The Bet Lynch Experience's avowed aim is to put the "fun" into "function band" their musicianship is something they take extremely seriously. The four band members between them have notched up an enviable list of credits including the recording of two top 40 dance hits; record deals with Sony, Virgin and London Records; touring with artists The Fun Living Criminals and Deftones; and record appearances and film soundtracks with various artists including Sam Brown, Little Angels and Timothy Spall.

Much of the band's unique sound comes from the versatility of female lead vocalist Doz, who adds violin, saxophone, acoustic guitar and Irish whistle to her vocal contributions. The other three band members are male lead vocals/guitar/mandolin, bass/vocals and drums. The band play a wide range of music incorporating many styles including rock, disco, ska, reggae, soul, funk, Irish jigs and even Zorba The Greek! Ideal for weddings and parties of all kinds.

These musicians have performed throughout the UK at top venues including The Hammersmith Odeon, The Town and Country Club, The Café Royal, The Dorchester, Claridges, The Savoy, The Wembley Conference Centre, The Eden Project, as well as at many corporate functions and wedding receptions throughout England.

The band normally play for two hours which can be split into two one-hour or three 40-minute sets plus encore. They provide their own PA, lights and can provide background music on CD, if required. The Bet Lynch Experience also perform as a five-piece band adding a keyboard player where requested. Our quoted price is for a four-piece band.

Travel and cost:
The Bet Lynch Experience are based in Hertfordshire. See Pricing for details of travel costs, etc
Add to My Enquiry List

"The band were fantastic. They were extremley friendly and down to earth but also very professional. They played all of the songs that we requested and were kind enough to let my brother join them on stage for a couple of Elvis numbers. The dance floor was packed for the whole night. Absolutley brilliant, would definitely recommend them."
Emma Sullivan - wedding reception - Surrey - November 2011

"Thank you very much. We have had lots of good comments from the guests. Great music. Very nice band."
Ann Senior - daughter's wedding reception - Gloucestershire - November 2010

"The two bands you arranged for our wedding were fantastic. A big big thank you for organising the two class acts for our wedding ceremony, drinks reception and evening entertainment. Ali and I had a wonderful time. Everything went like clockwork and it made the whole day very very special. All our guests told us how brilliant both bands were. Without them I doubt if the day would have been so fantastic. They were also punctual, polite, courteous and a pleasure to chat to. Expect a few referrals coming your way. We're already trying to find another excuse for a party!!!"
Peter Low - wedding reception - Surrey - November 2008

"The Bet Lynch experience were brilliant, the combination of them and a DJ were perfect. I can't believe you even need to ask the question about rating Function Junction - you know how excellent you are - thank you for everything, worth every penny and more."
Daniel Bateman - wedding reception - Berkshire - August 2008

"Totally professional and very friendly. Had so many positive comments about them. They made the party."
David Palmer - wedding reception - London - April 2008

"Definitely will be recommending the band - they were fantastic. Great ending to the best wedding day ever!!"
Sue Priestner - wedding reception - East Sussex - December 2007

"Thank you so much for the brilliant job you did at the BSC Centenary Ball. You really helped make the event the huge success we all wanted it to be. As you saw,from the very first number the dance floor was packed - not always the case- and it stayed that way right to the end of your second set. You really got the crowd involved and I felt they'd have kept going for hours more if you could have gone on......I strongly suggest that we book you again, although such was the impression you made that I would hope that will be the case anyway. Also on a personal level your helpful and friendly attitude was much appreciated ...."
Matthew Somerton-Rayner - Centenary Ball - W Sussex - June 2007

"The band were fantastic. Everyone commented about their performance was brilliant, they made my party."
Sally Kellett - birthday party - Berkshire - August 2007

"The band were fantastic. They fitted in with the atmosphere of the wedding perfectly. The dance floor was full the whole time they were playing until the early hours. Everyone commented on how good they were and one of my ushers is having them for his wedding after seeing/hearing them at the wedding. The last half hour 'rock requests/demands' was awesome. Thank you."
Matt Allnutt - wedding reception - Winchester - July 2006

"Thank you so much for putting on such a brilliant show! The music was simply perfect and it certainly got people on the dance floor! Thanks again, hope to book you again one day."
Chris Sims - wedding reception - Oxfordshire - July 2006

"Quite simply the band made the night, they could not have been better. Musically they were excellent and they got everyone involved and dancing. We would recommend them to anyone."
Neal Graham - Birthday party - Middlesex - June 2006

"Brilliant band, on the night they gave us a total performance and had the dance floor jammed."
Henry Coleman - wedding reception - Oxfordshire - September 2005

Got questions, or want to book 'The Bet Lynch Experience' for your wedding, party or event? Add them to your Enquiry List and then send them a message to check their availability.
Add to My Enquiry List